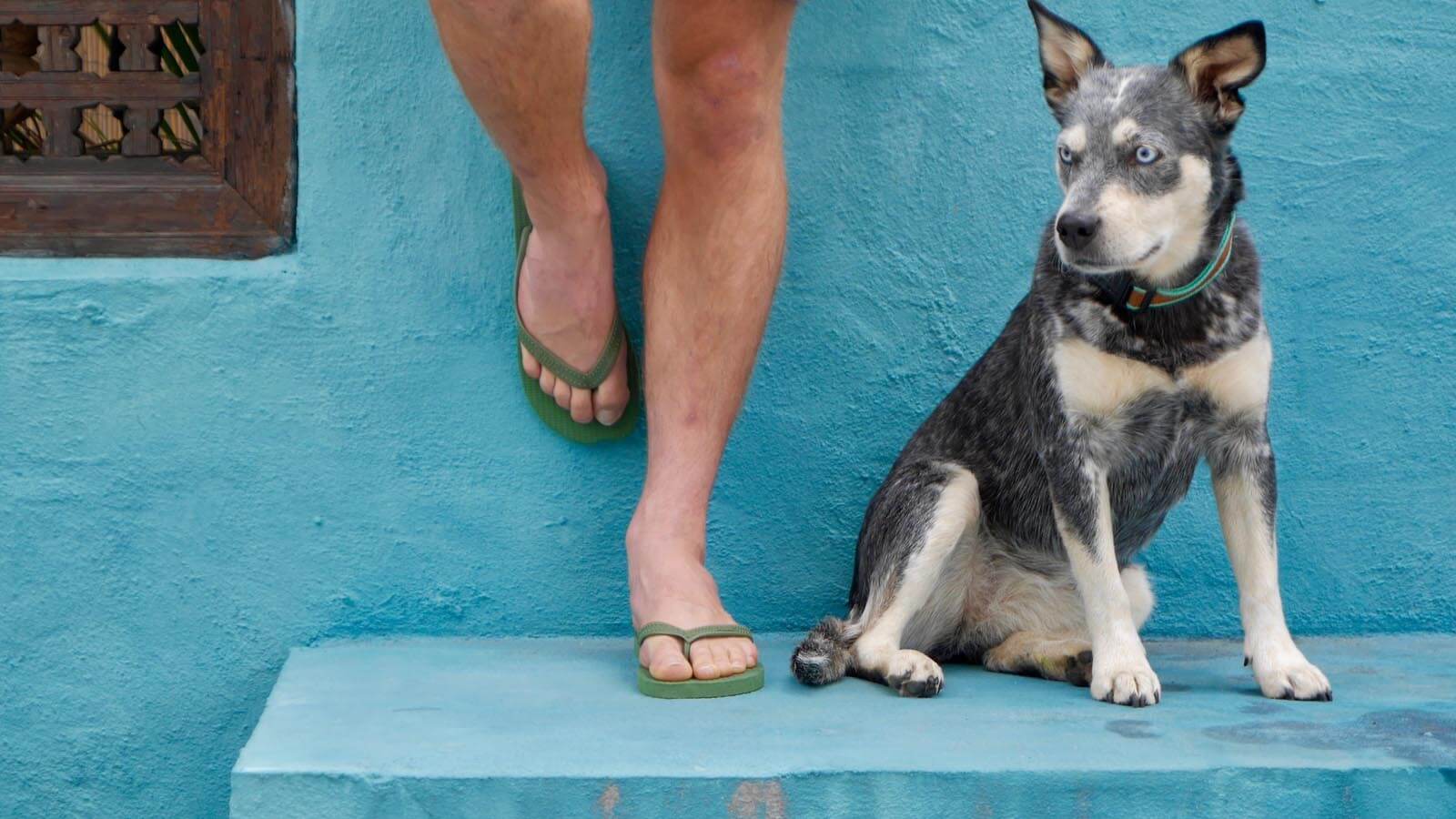 It was at a Sunday BBQ with friends back in the summer of 2014 that I found myself standing next to the back door, beer in hand, with a few of the ladies there that day. They were commenting on the several pairs (mine included) of Double Pluggers left at the doorstep. "God they're ugly." said one. "I wouldn't be seen dead in those." said another. "What!?!" I thought, as anxiety and self doubt started to creep over me. I was confused. How could they say such things? It was then that I asked myself, as this group of Brazilian thong wearing housewives frowned down disapprovingly at my Aussie Classics. Could I come come up with a version of Double Pluggers that would be not only acceptable but the thong of choice for these harsh critics?

It was then that I set to work and put in motion the makings of the reinvention of the Bum Nosed Double Plugger. As the name suggests, it had to have the characteristics of the original. The curved indentation at the toe and of coarse, the added strength of the double plugs on the strap. This was crucial. But I wanted to refine it. Not so wide in the sole. Narrow down the straps and give it a slight wedge. Improve the quality of the rubber and offer a more appealing range of colours and patterns. Most importantly, I wanted to bring out a ladies version. A delicate, femaline (is that even a word?) slip of a thing that would WoW the SSB set and give them something they quite simply, could not resist.

Aussie perfection does have a price.

Now that I had some hazy idea I dreamt up while under duress and under the influence at a Sunday Barby. I really had no idea what to do next. Normally I get these ideas, then by Monday, it's gone, vanished with the sea breeze. Not this time..oh no. I was onto something. I had a higher calling. I had a patriotic obligation to introduce the Bum Nosed Double Plugger to the rest of the world!!

A manufacturer. That's what I needed. Someone who I could personally work with to bring my idea to reality. Someone who could mould, inject, cut, shape and assemble the closest thing to Aussie designed thong perfection yet seen. I searched nation wide, with little luck, as there are very few in the game in this country and the operators that are, are way over our price point (Aussie perfection does have a price). I mean, who wants to pay 40 - 50 bucks for a pair of tongs? So naturally my eyes turned to China and I don't mean China plate - mate. I mean the mob up the road. The manufacturing world leaders of pretty much everything. I sent off an online search enquiry and was immediately inundated by Chinese rubber factories offering all sorts of rubber products. I won't go into those now. I was more confused than ever, my head was spinning. But there was one common statement from most of the respondents. "See you at the Canton Fair."  See you at the Canton Fair?  Canton Fair?  What the hell was that?

As it turns out, the Canton Fair is HUGE!! It's where China's manufactures go to show the rest of the world what they've got and what they can do and it's where the rest of the world goes to buy it. We were a little different. We had a design, a material and a brand. I just had to find someone who could make them to our desired specs. So off I went up to Guangzhou, Canton. Landing in Hong Kong on the red eye, it was straight onto the train for the two hour journey to Guangzhou. Needless to say I was stuffed by the time I got on the train. Sitting across from an old Chinese man sporting a confucius white wispy beard staring at me, I drifted off to sleep.

I awoke with a start as the train lurched forward. We had arrived. I felt dribble on my chin and looking down, could see a wet patch high up on my shirt. Hmmm. Sleep drool, not cool. As I wiped my face, I looked over to see the ancient Confucius mans expressionless face still staring at me. I frowned at him, blinking....I felt like David Carradine in the old TV series Kung Fu and I was ready to snatch the pebble from his hand...nothing. Once off the train. I shared a hotel shuttle with a large Indian looking man in a light suit. He had thick jet black hair and many gold rings on his fingers. "Canton Fair?" I said. Probably a little too keen.  There was a pause as he slowly turned his head to look at me. The expression on his face looked like he had just eaten a shit sandwich. "Yeth." he replied with a slight lisp. "Whats your product mate?" I ventured, despite the obvious disdain. "Fathion." He shot back with a flick of his head. Paused then "Thoes."  "You?" he asked, almost looking interested. He had an educated English accent. "Thongs" I replied. To which he frowned again. I'd lost him. "Ummm....Flip Flops." I blubbered out. He looked down at me for a second, slowly nodding his big head, then without a word turned to look out the vans window. Obviously not a purveyor of the finer things in life. Sun, sand ,sea, surf, skate ... bumnosed.

After a comatosal sleep, the next day I was ready to hit the Fair. Or so I thought. The hotel was close, so I decided to walk. There was this mass movement of people going to the Fair but mostly on coaches and shuttle busses. It was almost like a calling to preyer. Me, on the streets though was, well, conspicuous. After knocking back the purchase of three separate fake gold Rolex watches from three separate well dressed whispering Chinese men with semi open brief cases and darting eyes, I was approached by this also well dressed buxom woman. She started walking along side me. " Hello Mistaaa." in a high pitch. " Gday" I replied, looking down to see if she too was carrying a briefcase. Nope. " You like Guangzhou?" she said with a crocodile like smile. It was then that I noticed her gold front tooth and her not so good gums. "Yes." I said, almost mesmerised by the shiny yellow carrots. "You like lady friend in Guangzhou?" She says, looking up at me, still flashing her gold. Ah, yes, of coarse, I thought. "No thanks." I replied, quickening up the pace a little. The clip clop of her wedges also quickening on the footpath like a Shetland Pony. "My name is Nancy. I see you toniiiight?" "No thanks." I said, probably a little too fast. I started looking around me for an escape. There. A break in the traffic. I suddenly darted across the road. "See ya." I shouted over my shoulder as I legged it across the busy street. I looked over and she was still there on the other side of the road, standing on the edge of the footpath, staring at me with that golden smile. She waved. I turned and showing my entry pass scurried through the main gates of the Canton Fair.

Once inside I was quickly directed to the exhibition hall. As I walked onto the raised platform entrance to overlook the main hall, nothing prepared me for the shear scale of this facility. Over 1.1million sq meters of display space to house around 60,000 manufacturers booths.... WHERE DO I START!! So, armed with my drawings and concepts stored in my head, I started my search. I needed someone I could communicate with to build a good business relationship I could trust. I needed someone who was on the same page as me with my vision of the perfect thong. I needed someone with the in factory quality and ethics we've come to expect. The process is, you walk into a booth, sit down and start a meeting. Some were too helpful and could promise everything. Others were just rude and some just couldn't get there heads around what it was I was looking for. After walking what seemed like a 100ks and god knows how many meetings It was closing time. I'd be back tomorrow.

Next day, after a sleep of the ages, I was off again. This time I managed to dodged the fake watch sellers and was sure I was in the clear from my Golden toothed friend of yesterday. As I rounded a street side magazine stand to cross the road, I bumped into.... "Hello Mistaaa". I actually let out a frightened shriek. The gold flashing in my eyes. I found myself frowning and blinking again and momentarily mesmerised. I darted across the road again. This time no break in traffic as I frogged my way through it to some load car horns. I didn't look back.

It was the same as the day before. Walking and meeting. I had eventually narrowed down my preferred companies to four with one in particular more favoured. More due diligence would be done and I would organise factory visits through a law firm in Hong Kong. I was done and exhausted. This time I got the hotel shuttle back.

Upon entering the welcomed air-conditioned comfort of the hotel lobby I staggered over to the bar for a beer. I was just starting to dig into my complementary bowl of bar nuts when I hear a giggle beside me. "Hello Mistaaa".

You want thongs? We got thongs. A typical manufacturers stall at the Canton Fair.